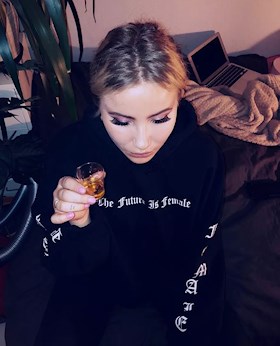 When she applied to run in the Boston Marathon in 1966 they rejected her saying "Women are not physiologically able to run marathon, and we can't take the liability"

Then exactly 50 years ago today, on the day of the marathon, Bobbi Gibb hid in the bushes and waited for the race to begin. When about half of the runners had gone past she jumped in.

She wore her brother’s Bermuda shorts, a pair of boy’s sneakers, a bathing suit, and a sweatshirt. As she took off into the swarm of runners, Gibb started to feel overheated, but she didn’t remove her hoodie. “I knew if they saw me, they were going to try to stop me,” she said. “I even thought I might be arrested.”

It didn’t take long for male runners in Gibb’s vicinity to realize that she was not another man. Gibb expected them to shoulder her off the road, or call out to the police. Instead, the other runners told her that if anyone tried to interfere with her race, they would put a stop to it. Finally feeling secure and assured, Gibb took off her sweatshirt.

As soon as it became clear that there was a woman running in the marathon, the crowd erupted—not with anger or righteousness, but with pure joy, she recalled. Men cheered. Women cried.

By the time she reached Wellesley College, the news of her run had spread, and the female students were waiting for her, jumping and screaming. The governor of Massachusetts met her at the finish line and shook her hand. The first woman to ever run the marathon had finished in the top third.

On behalf of my daughters, thank you Bobbi Gibb.